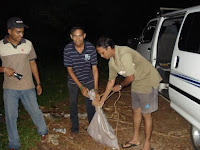 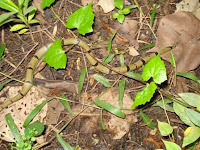 On 9th December 2009 Harsha, Tharaka, Indika and Kanchana got involved in releasing a Rock python (Python molurus) which was caught in Boralesgamuwa in the suburbs of Colombo. We got the message at 4.30 in the evening but the villagers had caught it in the previous night and kept in a barrel under very pathetic conditions. When we phoned the National zoo we were asked to release it to the Attidiya marsh which is a sanctuary where there are lots of people. We were not happy by the idea as we felt that the python will face the same danger again as there is a possibility of getting it caught by people again. When Tharaka and Indika visited the place where the python was kept people have gathered around it and making fun by showing it to the people who have gathered due to news that spread from the previous night. Somehow they were able to persuade the villagers to release the python. Tharaka, Indika and Harsha were able to put the python in to a big bag and transported it to a forest in Avissawella area by a van. The mission was accomplished around 8pm after getting delayed at an Army checkpoint where we had to answer many questions about transporting a python in a bag. However at the end of the day we all were happy as we rescued its life.
Next day morning Kanchana had to face another group of villagers who were trying to kill a Banded Kukri snake (Oligodon arnensis/“ Arani Dath Ketiya”) while she was waiting for kids’ school van. She was alone trying to convince the people that this snake does not harm for people and asked them to help her to catch it. But they were not so please about her request. However she was able to stop men killing the innocent creature and caught it into a bag and released into the reservation in the Bellanwila marsh behind her house. Wow it was a week of snakes!
Posted by Kanchana and Thushara at 10:52 PM No comments:

After a lapse of few months ECO-V revived its educational visits to different parts of the country again. As the first trip for year 2009, we decided to take our members for 2 days “Thiresi Charika” to war ravaged Eastern province capital Trincomalee by train. Ranjith, chief organizer of the ECO-V was back in action with Harsha in organizing the field trip. We wanted to keep the crowd to minimum as we were not sure what to expect. At last 15 of us started our journey from Colombo Fort railway stain by night train. It was not too bad though we struggled to catch our sleep with hundreds of mosquitoes who got into the train. However we reached Trincomalee by 6 am in the morning on 28th November. We were received by Sarvodaya district coordinator Jeeva aiya and we were ushered in to a van and he took us to sarvodaya guest house.
There was a drizzle when we reached Sarvodaya Centre at Uppuweli but it didn’t stop us having a great day in Tricomalee. After a lovely breakfast we visited Nilaweli beach which is named as one of the most beautiful beaches in Sri Lanka. We were not encouraged to visit the Pigeon Island one of the marine National parks in Sri lanka in the morning .Therefore we decided to go to Thiriyaya, Girihandu Seya temple which is about 33 km away from Nilaweli. It was a very beautiful area where we saw some birds including Jungle fowl, Green bee-eaters and Malabar pied Hornbills. The scenery was so exiting when we climbed the rock where we could see most of the province up to Mullaitivu. There were many ruins of Buddhist pagodas which were supposed to be first build during Lord Buddha’s era. We all were so glad to be there after 30 years of the war where the area is lot of activities for development and re awakening.
On our way back we visited Nilaweli beach again and had a discussion about environmental facts and issues in the area. We were thrilled as the boat men agreed to take us to Pigeon Island in spite of the rough sea condition which had a great risk too. But it was a life time experience and we all were very happy to be there. Everybody enjoyed the sea bath at the end and we returned to Sarvodaya for early dinner. We had a short “Thiresi discussion” after dinner in the beach hut of Sarvodaya and everybody agreed for more frequent meetings and field trips since the war is over.
Next day morning we visited Koneshwaran temple and got into the train at 10am. No body felt tired during the 13 hour train journey as Nanda, Prasanna and Ranjith kept us laughing by making jokes on each other and feeding us with many snacks. We all were very happy as it was a very successful field trip after many months of silence.
Posted by Kanchana and Thushara at 10:50 PM No comments: 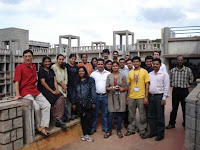 I had a great opportunity as alumnus of International Training Centre (ITC) at Durrell and also as an alumnus of Conservation leadership Programme (CLP) to participate in a workshop in training on scientific writing for peer reviewed journals. ITC at Durrell sponsored all my expenses for the training and there were 16 CLP alumni in the 5 day workshop held at NCBS campus in Bangalore. Dr. Martin Fisher, Editor of Oryx, the Journal of Fauna and Flora International, UK conducted the work shop while Dr. Charu Mishra and Dr. Uma Ramakrishnan were the co facilitators for the workshop. Stuart Paterson from CLP coordinated the work shop. I also met our dear friend Ramesh Kannan from ATREE India who visited us last year during my stay and had discussions on our future projects. Workshop was a great opportunity to meet my old friends from CLP, Wakid Abdul, Bandana Aul and Supria Juhangwala who were with me during past CLP programmes.
Posted by Kanchana and Thushara at 10:48 PM No comments:

In London and Cambridge 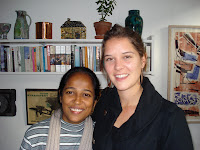 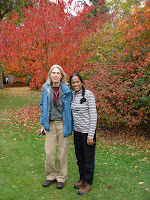 After 5 days in Jersey I had to say good bye to everybody and I flew back to London and joined with Sarah and Tom Bear in Cambridge. Meeting Prof. Nigel Leader Williams at Cambridge University and Sue Stokes (Kate Stokes mom) were the highlights while I was in Cambridge. It was very nice to meet Sue and talk about Kate Stokes Memorial Award training programme for Friends of Mother Earth. Thanks to Tom and Sarah I had a very fruitful time in Cambridge visiting Fauna and Flora International (Meeting with Stu Paterson). It was very nice to meet Nigel Collar from Birdlife International and his daughter Clio Collar who was a volunteer to ECO-V two years ago. After Cambridge , I went to London and stayed with Catherine Faulks and Edward Whitley and family before I came back to Sri Lanka. Discussing the progress of ECO-V and future plans with them was very useful. I came back to Sri Lanka on the 31st of October after a very successful travel in UK.
Posted by Kanchana and Thushara at 10:41 PM No comments:

In Jersey Zoo after 10 years of my first visit 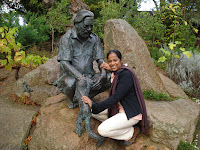 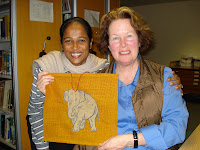 I was lucky enough to get the second training from International Training centre at Durrell, Jersey Zoo in October 2009. This was my 3rd visit to Jersey zoo and I really enjoyed the developments I saw since my last visit in 2007. I was there for 5 days learning about Invasive species management. There were 16 participants from 12 different countries and it was very interesting to share ideas and learn new skills on managing the invasive species. I was so glad to meet my friend Sita from Nepal whom I met at Waheningen International, Netherlands during wetland management course and it was fun to share a room with her again.


I went to Jersey two days before the course started and spent time with my dear friends, June and John. It was very nice to be with them again and to go on horse rides. Meeting John and Judy Banks again after two years was a very happy moment. Talking about changes in Sri Lanka where they were born and talking about common friends was very interesting. I really didn’t have enough time to meet my old friends but just managed to meet Jo, Jamie, Chris, David, Catherine and John Fa. Meeting Dr. Lee Durrell after 10 years was so nice and I am so glad that we had enough time to catch up few things. It was such fun time meeting all trainees from different Islands on the world and all of them came from Islands smaller than Sri Lanka.
Posted by Kanchana and Thushara at 10:20 PM No comments: