After a great retreat at Grand Canyon we all came back to Phoenix and some of the fellows flew to West coast to continue their travels. I and few fellows had to stay one more night in Phoenix as flights to East Coast had got cancelled due to hurricane Sandy. Finally I arrived to Washington DC on the 31st of October. Next day was the day to meet Robyn Dalzen and Julie Jackson at Conservation leadership programme (CLP) based at Conservation International. They have arrange a lunch time talk for me and was the time to say thank you to CLP for helping me to come this far starting in 1997 with Sinharaja 97’ (was an expedition with 4 Cambridge students and two Sri Lankan counterparts near Sinharaja forest in Sri Lanka).

Next day I had some free time to visit Smithsonian Air and Space Museum and also Native American museum. I have visited Native American Museum when I came to DC in 2005 for Environmental Leadership programme conducted by Smithsonian Institute. So I always wanted to come back as it was such a living place with rich art and culture of Native Americans or “Amerindians” as they call. 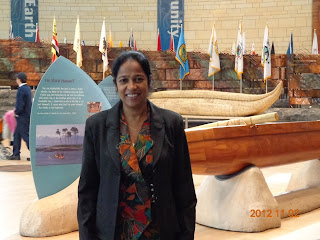 I had a great privilege to visit “Climate reality project” initiated by former vice President Al Gore. He was my one and only favorite politician in USA since I started studying and talking about Climate Change issues. I could not meet him but I met his Programme officer Kevin Curtis. It was such a wonderful meeting where I was invited to be a panelist for their upcoming 24 hour Reality programme on the 14th and 15th of November. Unfortunately I could not get permission from Eisenhower programme as they have a mandatory session for us in Philadelphia. Anyway now I am invited to participate the final session of 24 hour Climate Reality on the 15th of November where Vice president Al Gore will be speaking. So it will be an exciting event!

My next travel destination was New York. Due to unpredictable weather conditions and still New York airports have not started their normal routings I was advised to take the train and it was a nice train journey which gave me more reflection time on this leadership programme.
Staying at the Millennium Broadway Hotel at Time Square New York was a very different experience for me. So many people, Neon lights, busy streets, crazy taxi drivers really confirmed me I am in New York! I had a very good time during my B’day weekend in New York and it was a very personal time with my aunt and cousins and no official meetings!

Wildlife Conservation Society (WCS) at Brox Zoo was my next destination. WCS is also a partner of CLP programme so meeting Christina Imrich for the second time was a very happy moment. She has arranged me few meetings and also a lunch time talk for staff at WCS. I had a great day at New York Botanical Garden on the 6th November which was the USA Election Day. Learning about urban gardening, and how it can be used for conservation education was very interesting. The election night was full of fun and activities when I came back. Spending time at Rockefeller center and Time Square gave me some insight to US election culture.
Next day was again traveling but had 2 very successful meeting at prospect Park Zoo and with an Eisenhower alumnus Paul DiPerna. Then Saliya Peiris and I travelled to Boston by train. It was snowing again in New York when we started traveling.
Eisenhower un-conference was the conference organized by New England Eisenhower fellows and it was a very nice and friendly event where I met many alumni and got experience about “Open Space”. Night was full of food and music at State House in Boston.
After a day again…travelling… but this time across USA to San Francisco from Boston. Six hours….what am I going to do???
Posted by Kanchana and Thushara at 9:05 AM 1 comment:

Grand Canyon in USA - What a splendid beauty of Mother Earth?

When we stopped for lunch at Sedona and waiting in the line with other Sri Lankan fellows I saw one gentleman walking with a very familiar cap on his head. I was watching it and recognized the emblem on it. It was our lion the Sri Lankan golden lion!!! I was surprised and pointed out it to other fellows and yes we started talking…so that’s how we met Captain Dhammika Dias who is a Navy officer under a training here in USA. It’s really surprising and we all were very happy to say hello to each other far away from our Mother land.

We all reach the Yavapai Lodge at Grand Canyon east Rim at 4pm. Leigh and Holly suggested we should watch Sun Set. So having not seeing the Grand Canyon yet! I got into shuttle bus with a question mark on my head. What kind of place this is???  Well we reached Mather Point at 4.40pm and after a short walk we went to Mather Point and it was so many WOWS….I heard…Oh my goodness..what a piece of work…I was thinking who did this???? That is a river, The Colorado river has done over million years. It’s eroded ground with 447 km long, 29 km wide, and 1.6km deep. http://www.nps.gov/grca/index.htm. After creating such a great piece of ground Colorado river still flows silently and we saw it at a distance just like a snake.

Sun set was so beautiful, we took several picture and left Mather point as it was getting much cooler.
Next day we had a guided tour around South rim of Grand Canyon and it showed us more amazing landscapes. I had an opportunity to hear about biodiversity of the Canyon from a park officer and rest of the day was relaxing when other went for a helicopter ride.

Next day morning was the time for Sun Rise..I was thinking of Adam’s Peak (http://en.wikipedia.org/wiki/Sri_Pada_%28Sri_Lanka%29) and this was huge and landscape was totally different from Adam’s Peak. So again it was a different beauty as it was full moon Poya day and we witness the beauty of full moon and the rising sun. Then we went to Imax movie theater in nearby city and it was a 45 minute film on history of Grand Canyon. It was so nicely done and watching it at 3D theater was giving us the real feeling of the Colorado river and the Canyon. It reminded me my experience of learning about planets and weather in Norrokoping, Sweden during Climate Change Training course last year which was a similar theater which gave us 3D experience.


Well that was my experience at Grand Canyon. Throughout my stay there I was trying to understand who I am, and what kind of impact we as human being put on this Mother Earth but no matter still she is giving us so much back. I felt so small there as the Grand Canyon is a massive piece of work done by the Colorado River.

What a retreat in the middle of the Eisenhower fellowship - Thank you!