Updates from Melbourne on ECO-V 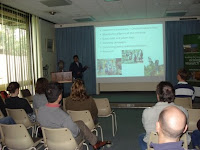 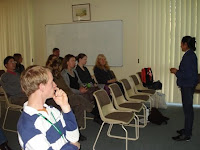 This is the third update from Melbourne on our activities and networking on ECO-V future work. Its four months since we came to Melbourne and settled down in nice suburb of Fairfield, Northcote. It is winter (coldest winter in 4 years!!) here now and temperature hits 3C sometimes in the morning and night. On and off rain (some say they are getting rain after ten years) and the high wind keeps you really cold and chilly. But we have to say this is much better than both of us expected. Kids love the new environment and they perform well in the school too. We also had the time to meet some of Thushara’s friends in Melbourne who were at school and school hostel with him during school days (meeting most of them after twenty years).
We are mainly concentrating on networking for the future of ECO-V while we are here and planning the activities for 10th Anniversary of ECO-V next year. We are really happy about the way Harsha and the team working in Sri Lanka keeping the ECO-V live in our absence. I will be speaking to volunteers on 15th August from here via skype when they meet for the first Thiresi meeting after ending the war last year (We stopped the meetings during the heights of the war due to on and off bomb blasts in the public transport in 2009).
Jim Crosthwaite (Biodiversity Policy and Programme officer at department of Sustainability and environment) whom I met on the road became the first “Friends of ECO-V” in Melbourne and now continuously helps me to develop networking in Melbourne with different environmental action groups. We are planning to create a project on climate change awareness in Sri Lanka with the support of different organizations and individuals in Melbourne.
Last month I had an opportunity to work few days in Department of Sustainability and Environment (DSE) in Victoria (http://www.dse.vic.gov.au/dse/index.htm) due to Jim’s recommendations where I met lot of people on different aspect of environment conservation. I also delivered a speech at Arthur Rylah Institute for environmental research at DSE (http://www.dse.vic.gov.au/dse/nrenari.nsf/Home+Page/DSE+ARI~Home+Page?open) on my work where most of the DSE members participated and gave me lot of inputs to my work here. The next presentation by me will be at their head office on the 13th of August.
We also participated at a meeting in Darebin Climate Action group (Darebin is the local council we reside) where we listen to David Spratt who co-authored the book on climate change called “Code Red” with Phillip Sutten (http://www.scribepublications.com.au/book/climatecodered). Incidentally Phillip is in the same suburb as us in Fairfield and Jim introduced him to me and he is keen to look at our proposal on climate change awareness project in Sri Lanka and advice on it.
I visited Centre for education and research in environmental strategies (CERES ) (http://www.ceres.org.au/) with Kids and Pascal another environmental activist I met during a tree planting programme. This trip gave me an idea of how environmental education groups work here in Australia. She took me to Merri Creek management Committee (MCMC - http://www.mcmc.org.au/) and got familiar about their wonderful efforts in environmental conservation.
I am also involved in writing a column on environment in Ariona (www.ariona.com.au) a life style e-magazine in Australia and first edition was launched last week. You all can read my article under Nature and us. (http://www.ariona.com.au/magazine/index.php?option=com_content&view=article&id=198:kanchana-weerakoon&catid=78:environment&Itemid=315 )This is launched and coordinated by Dimuthu Dias Mendis, a Sri Lankan who is also an environment enthusiast like us.
Well we wrote this with many web links. But thought of mentioning it for anybody who likes to explore more about these wonderful organizations/places that we are involved with.
Will come back to you with more updates soon.
Metta
Thushara and Kanchana
Posted by Kanchana and Thushara at 6:51 AM No comments: 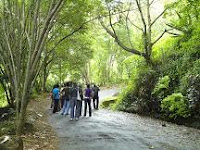 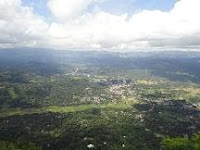 By Madhubahsani Jayawardena
Eco-V team went to Ambuluwawa Mountain on 4th July 2010. Since it was planned as a one day field excursion, the day commenced at 4.45 a.m.
Ambuluwawa Mountain is located right in the middle of Gampola town which is a four hour drive from Colombo. It is at 1065 metres from mean sea level.We stopped for a way side breakfast at Kadugannawa. But the smell of decaying garbage that came along with the cool breeze made us to re-pack our breakfast packets and we decided to go straight to Gampola, to home of Harsha’s aunt. Our breakfast was Imbul-kiribath (Milk rice balls with hot and spicy fried onions in the middle) wrapped up in Kenda leaves and Harsha’s aunt served us coffee.
Over the coffee Harsha briefed the day’s programme. As there is so little information, we have to be more observant he said. His uncle provided us with some interesting facts on history of Ambuluwawa. Gampola was once an ancient kingdom of Sri Lanka. King Buvanekabahu’s castle was on this mountain and many secrets about his wealth are buried there. This is a treasure mountain abused by robbers over the years.
Although Ambuluwawa is declared as a Bio diversity park, very little amount of information on flora and fauna was available. Browsing through cyber space one can find only one scientific paper which is on lichens.
We send our vehicle forward and walked from the entrance. Along the circular road, at each bend the summit appeared closer and closer. There was a flowering Binara (Exacum trinervium) among many introduced flowering plants that were in abundance. Sporadic small forest patches on either side of the road are greatly disturbed. Three wheeler taxis were going up and down the circular road creating an uninterrupted flow of traffic. We witnessed the impact of traffic, when we came across a dead Le madilla or common rough-sided snake (Aspidura trachyprocta). Green forest lizards (Calotes calote) were not bothered by the cool clime. A peculiar insect was crossing the road. It forms in to a ball by curling its body and rolls away from its enemy if touched. When the sun shinned through intermittent drizzle, birds came out of vegetation to feed. We managed to list out 18 bird species and the day’s treat was the sighting of a Wood pigeon.
We had our lunch at a small restaurant that was very close to the top and walked to the top of the mountain. The summit is maintained as a universal dharma centre. A small mosque, a Christian church and a Buddhist pagoda were there. Pagoda is dedicated to farmers and named as ‘Govi Jana seya’. Through the mist, Mother Sri Lanka appeared as a masterpiece of a great artist. But, inappropriate concrete structures reduced the scenic beauty. It is said that on clear days one can see even the Airport at Katunayake.
From my point of view, Ambuluwawa can be develop and utilize as a good location to relax and to feel the nature. It also lacks proper information of its fauna.
you can see the photos at slide show on "Ambuluwawa ECO-V 2010"
Posted by Kanchana and Thushara at 4:59 PM No comments: