Today our day began at the infamous 4.30am ECO-V start, where we woke up to start our journey up north with Kanchana who had to deliver two talks to different groups. The first was at an archaeological site at the ancient Yapahuwa civilization ruins for the staff and workers, and the second was for the “Training for Trusteeship” program, organized by the Weeramantry International Centre for Peace Education and Research (WICPER).

After about four hours of driving (and snoozing), we arrived at the first location – Yapahuwa. It was an amazing experience to see first hand the excavations of an ancient city of Sri Lanka, dating back to over 1300 years ago. The site looks very similar to Sri Lanka’s famous Sigiriya, but a smaller version and is supported by the Department of Arts and Culture of Sri Lanka. Guyani, a Kelani NadeeYathri, recently got a job as an archaeologist at the site and being the enthusiastic environmentalist she is, began her campaign to raise the environmental awareness of her work colleagues. We were privelidged enough to be given a tour of the excavation site, where we talked to the workers and archeologists who were uncovering ruins and trying to reveal the history of the ancient civilization. We witnessed both the hard work of the archeological team as well as the old temple structures built around a towering rock. We ended the tour at the temple site and walked down very steep steps to the hall where Kanchana was to give her presentation. Over 50 people attended the talk, consisting mainly of archaeologists, labourers, draftsmen, assistants and also the chair of the project. Kanchana talked deeply about consciousness of ourselves and the environment around us, and not just delivered the talk beautifully and passionately, but made people emotional including the chairman, who vowed to immediately begin local campaigns to raise environmental awareness.

We were fed well, eating local cassava and poll sambal (coconut salad) served on banana leaf, then we hit the road again to head to the next destination – Anaradhapura. Two hours later, we arrived at the beautiful training centre called Islander or heart of Sewa Lanka, where the “Training for Trusteeship” program was being held. This is an annual training program coordinated by WICPER, a peace and justice organization in Sri Lanka. The training targets young future leaders of the country, to understand their roles and duties, to their communities, environment and future generations. Kanchana delivered a similar presentation to this group of 60 motivated youth, the majority coming from Sri Lanka, and a minority from Maldives, Bangladesh, and Indonesia. This group was tougher to speak to, as they already had a good understanding of the environmental and social problems the world faces, our global development challenges and the role of government and civil society groups. Their questions led us to see that although they were knowledgeable about problems, they don’t know what to do with this knowledge or how to overcome or solve the big issues that we all face. For example, one young lady asked, “What does self-governance without government look like?”. Many big questions like this were asked, and due to the lack of time we had, it was difficult to answer and discuss these issues.


So we finally got back on the road to head back to Colombo around 8.30pm, with a stop for dinner, reaching home around 1am, crawling into bed and thinking about these young people and the task they have ahead of them in this world. We have thought about this and continue to think about it – how can we equip young people in this world, so they can not only live sustainable lives, but can bring about social change in order to ensure future generations can live in a beautiful, just and peaceful environment?


Posted by Kanchana and Thushara at 9:07 PM No comments:

It seems like we could not update our friends of  ECO-V for long time. Some people asked us why we were silent. Its not that we didn’t do any work but was engaged with more work and didn’t have time to update. So here again some news for you.
There were several activities taken place in the month of August. One was for kids...
The month of August was the school holidays here. I was involved with a programme conducted by Vishwa Nikethan Peace Center at Sarvodaya, Moratuwa where I serve as a trustee. 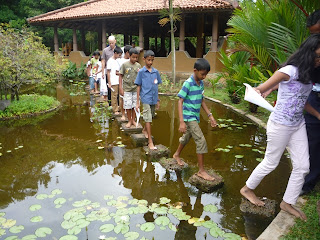 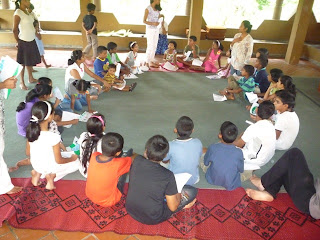 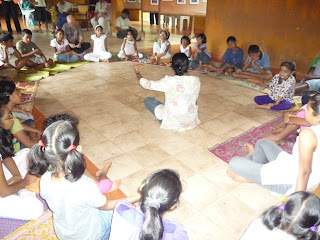 It was a programme for kids aged between 5-11 years to give the experience of Nature and increase their sensitivity towards mother Earth. We talked about self discipline through meditation, learning and getting connected with natural services, importance of Natural resources and increasing consciousnesses etc. It’s not possible to do such change within one day but kids need more and more experience like this to learn right from beginning. It was very encouraging to work with them and answer to their questions and to see how they reflect nature.
Posted by Kanchana and Thushara at 9:27 AM No comments: