Sunday morning on the 1st of April, the yathrees and some ECO-V members met in Colombo to participate in the youth Earth Walk 2012. The event was a collaborative effort of "Youth for Greener Sri Lanka (YGSL)" the newly formed network of youth The group joined hundreds of youth in a march through Colombo’s streets in an effort to spread messages about climate change. The ECO-V banner was carried with pride, as well as a number of posters with slogans about climate change and the environment. The group did themselves proud and it was heartening to see the yathrees continuing their campaign in raising climate change awareness. 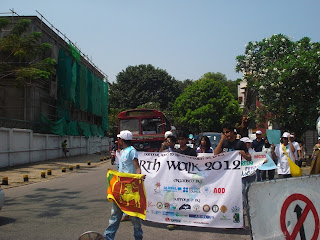 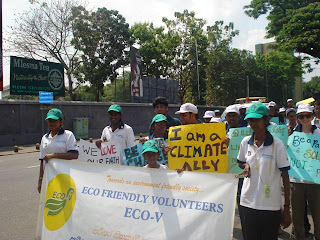 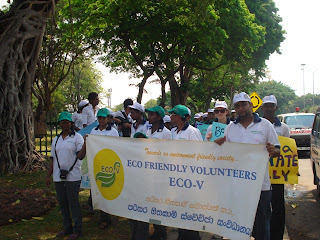 After lunch in the park, the weary yathrees bid farewell to one another and began on their journey to their home towns across the island. Personally it was so great to meet the yathrees (having heard so much about them!). They are a passionate group of budding young environmentalists who are doing themselves, and their country, proud! Keep up the great work!!  - Jakie Scally
Posted by Kanchana and Thushara at 3:34 PM 1 comment:

My Future My Country exhibition of ECO-V

What a busy week this one has been for ECO-V and many of the KNY yathrees?!
‘My Future, My Country’ exhibition was held from Thursday 29th – Saturday 31st March at the Public Library, Colombo. The exhibition, targeted at youth, included displays about climate change, sustainability and biodiversity. A key theme of the exhibition was introducing the concepts of ‘carbon footprint’ and ‘eco-handprint’. The various displays gave simple and handy tips on how to reduce your carbon footprint and increase your eco-handprint in order to live a more sustainable life. Tips were given on waste management, energy efficiency, transport and food.
A significant part of the exhibition included a display on the Kelani Nadee Yatra. This included photos and poems from the journey, as well as art work and the screening of the KNY documentary. Many of the yathrees travelled to Colombo to participate in the exhibition. It was great to have the yathrees on hand to share their stories of the journey and help spread the message about climate change and sustainability (I think they also enjoyed catching up with each other too!).
Overall the exhibition was a success! Across the three days, many members of the public wandered through the exhibition and I’m sure the majority left with new ideas about how to make their life more eco-friendly. Hopefully the ‘butterfly effect’ will take place, and those that attended will share the messages about sustainability with their family and friends. ECO-V also recruited some new members and sold quite a bit of ‘eco-friendly’ merchandise – the coconut badges were a particular favourite!
Posted by Kanchana and Thushara at 3:24 PM No comments:

I was able to witness a very succssful exhibition of ECO-V which finished on the 31st March and all Kelani Nadee Yathrees and some other ECO-V members gathered at Saravodya, Moratuwa to celebrate Earth Hour 2012. Rest of the team of Earth Hour Sri Lanka joined with the president at Presidents' house in Kandy as we could not join with them due to exhibition we had in Colombo. At 8:30pm, the lights were turned off and oil burners lit. The coconut oil smelt quite delicious! The oil burners were laid out in the shape of 60+. The ‘60’ symbolises the one hour beyond the one hour.  that is observed during Earth Hour, and the ‘+’ symbolises the continuation of sustainable practices.
During the hour, Kanchana took the opportunity to reflect on the lessons learnt during the exhibition, asking the yathrees to identify one action they were going to take to improve their eco-handprint. This was an excellent way to conclude the three day exhibition.


Posted by Kanchana and Thushara at 3:07 PM No comments: