The countdown for Earth Hour in Sri Lanka continues with great excitement. On 19th March morning (very early this morning, infact) we rubbed bleary eyes and held back yawns, as we headed out to see the launching of a hot air balloon promoting Earth Hour. Arriving before dawn, the oval was already a hive of activity. Many familiar faces from the press conference last week were here again – Hon. Udaya Gammanpila (the Western Province Environment Minister) and pop singer Bhathiya Jayakody were amongst the crowd. Organisers handed out Earth Hour t-shirts and it was an impressive scene to see so many wearing the shirts in support of the pending event.
A traditional Buddhist blessing preceded the launching of the balloon. This was a beautiful ceremony to experience and I was fortunate enough to receive a “blessing cord” from one of the monks.

With the ceremony complete, attention quickly turned to the balloon. As the Earth Hour banner was stuck in place, the balloon was inflated. Crowds gathered to take photos – the Minister, Bhathiya and others posed for photographers.
All was looking good until the Earth Hour banner became too heavy for the balloon to launch! This banner was removed and another strapped to the basket, as Bhathiya, and Abdul Uvais from Earth Hour Sri Lanka, joined the pilot for take-off. 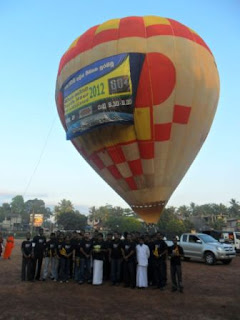 It was a beautiful sceptical indeed to watch the balloon glide across Colombo’s morning sky.
It seems Earth Hour is gaining increasing attention and support in Sri Lanka, and if this morning was any indication the event itself promises to be an exciting one. Stay tuned! Jakie Scally – Volunteer for journeys for Climate Justice (JCJ)
You all can visit our website www.eco-v.org and show your support towards Earth Hour 2012
Posted by Kanchana and Thushara at 7:37 AM 1 comment:

Last year was our 10th year and we had a real journey to mark our 10th anniversary and that was kelani Nadee yathra. Again this year we are busy with some more exiting work so we could not do anything to celebrate our 11th Anniversary. Instead we are working hard to save environment.  Our most senior member and always wanted encouraging us to get to gether to do something as members is Mr Sugathadasa...evrybody's Sugathadasa uncle. He suggested we should meet for a lunch and have a friendly chat. So as always it was a very quick action. We decided to meet in Colombo. Whoever could make it was invited to have a lunch and our volunteer Jakie was also with us. She reports about our meeting...
Today, many of the ECO-V volunteers met to share lunch and have a general catch-up, which I’m told was many months overdue. Personally, it was great to meet the diverse and very friendly crowd of volunteers! I could sense that everyone enjoyed catching up and many stories were exchanged. After lunch, the group headed to a nearby park where we sat in a shady location and Kanchana shared updates including relaying the tips from the Power & Energy Minister’s talk the previous day.
The rest of the month is looking like it will be a busy time as we prepare for the Kelani Nadee Yatra exhibition to be held at the Public Library, Colombo from the 29th – 31st March.

Posted by Kanchana and Thushara at 7:11 AM No comments:

We had two more international Visitors who admired ECO-V activities living with us for nearly 5 weeks in January and February. After they went back we have our 5th visitor for this year. Jackie Scally who got inspired to volunteer for ECO-V after listening my presentation about Kelani nadee Yathra is with us now. Thanks Jakie for writing our blog. It made my work easy! - Kanchana
Thursday was the official press conference for Earth Hour 2012. The Minister of Environment for the Western Province, Udaya Gammanpila, was in attendance to launch the event. He spoke about the significance of Earth Hour and the importance of taking action to address climate change. Minister Gammanpila was accompanied by other event ambassadors, which even included a Sri Lankan pop singer! Kanchana represented ECO-V on the panel of ambassadors.
Earth Hour 2012 will take place on March 31st from 8:30 – 9:30pm. The event will be held at the residence of the Sri Lankan President, H.E. Mahinda Rajapakshe. Several of the Kelani Nadee Yatra youth will be attending the event – all of whom are excited to be visiting the President’s house!!
Friday the 17th, Kanchana and myself attend a presentation by Hon. Patali Champika Ranawaka, Minister of Power & Energy. While the presentation was made in Sinhalese, I managed to grasp a few key points and was thankful that a power point slide accompanied the talk with many diagrams!! Kanchana helped relay some of the main items the Minister discussed. Among them were the importance of moving to renewable energy in the face of rising oil prices as a result of diminishing supply. The Minister said the Sri Lanka is well placed to move more and more to renewables such as wave energy, geothermal and wind. He concluded his presentation with a number of practical tips people can employ at the grassroots level. This presentation will provide a useful resource for ECO-V and in particular will help inform some displays at the Kelani Nadee Yatra exhibition at the end of the month - Jackie Scally from Melbourne, Australia
Posted by Kanchana and Thushara at 2:27 PM No comments: