Last week, I was very lucky to be able to experience Sri Lankan New Year in the traditional way amongst Kanchana’s family.
One of the best things about my stay has been having the opportunity to encounter many parts of Sri Lankan living from within, in ways that Tourists often don’t. New Year was one of the highlights of these times.
The two day public holiday begins on the 13th April, New Year’s Eve. Kanchana had invited all the neighbours in the surrounding area to come and begin celebrations with a children’s party complete with games and prizes.
Some of these were familiar to me, since they were very similar to game played in England when I was a child. For example, the game to draw an eye on an elephant whilst wearing a blindfold was very like “Pin the Tail on the Donkey”. I have included a few photos below, and a short clip of one of the games features on the YouTube clip on the right hand side.
The Mum's got in on the fun, too! 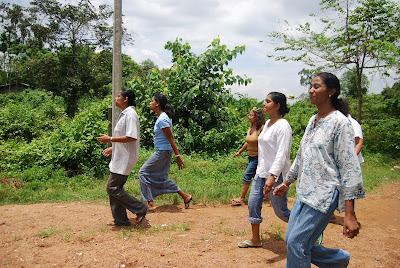 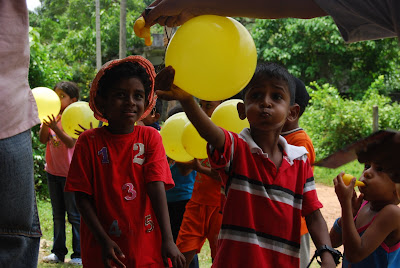 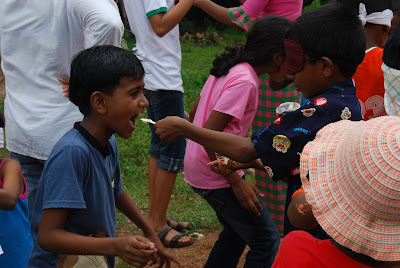 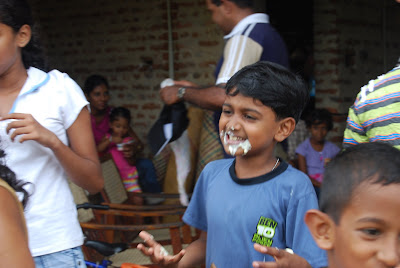 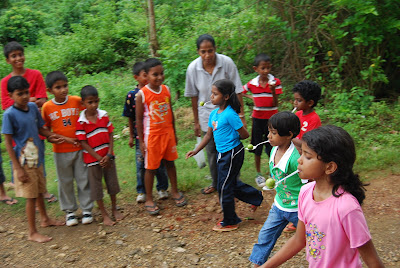 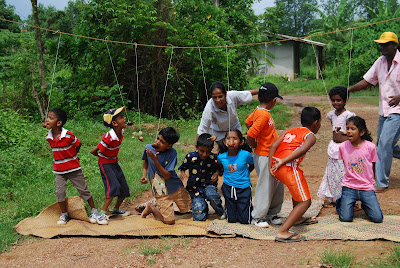 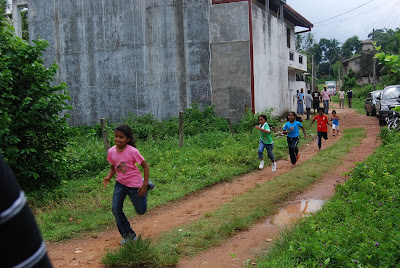 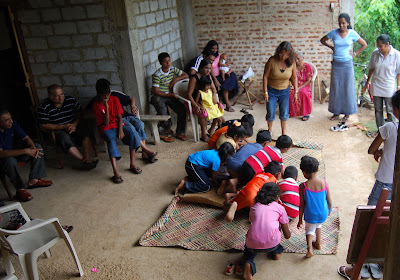 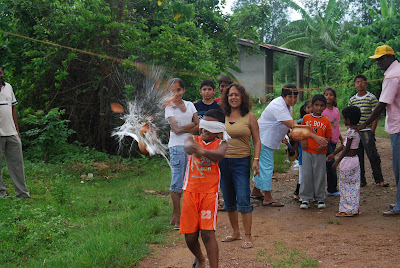 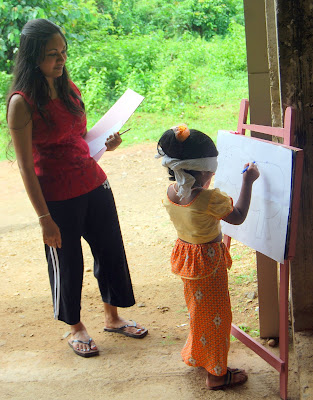 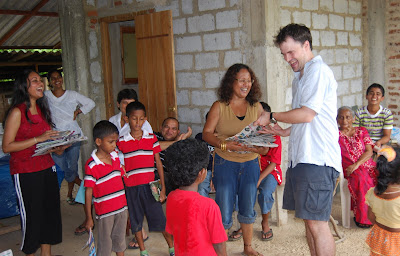 Children and parents alike seemed to have a great time, and I enjoyed myself immensely as spectator, photographer, and prize giver!

On New Year’s Day, it was a very early start. The astrologers had determined that the auspicious time for beginning to boil the coconut milk was at 5.05am, with the time for gifts and eating at 5.50am. The completion of the cooking the milk (which is used to make the milk rice - the traditional New Year food) is when it boils over from it’s clay pot (which is traditionally new). It was important that this happened in time to prepare the food for 5.50am - so when it reached boiling it was welcomed as a sign of prosperity for the New Year. 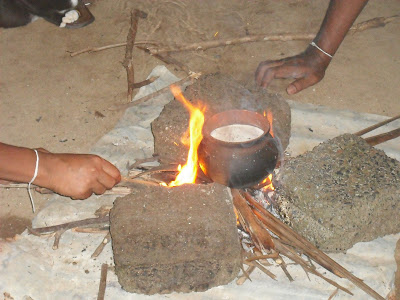 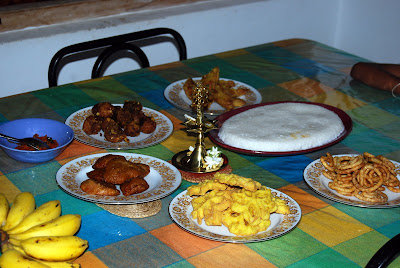 The breakfast of the delicious milk rice was served with a number of traditional New Year sweet items. It was a real honour to be part of this important and cherished tradition, and I was particularly touched to receive a gift of a lovely new shirt.
New Year is a time of worshipping the elders, and gift giving is accompanied by bowing to the ground before the elder gift recipient.
We then left for the 2 hour journey to Kuliyapitiya, the small town where both Kanchana’s and Thushara’s families live. On the way, the boys, Buhusuru and Nipuna set about teaching me how to say Happy New Year in Sinhala: “Suba Aluth Awuruddak Wewa!” It didn’t exactly roll off my tongue initially, but I eventually got the hang of it - sort of. 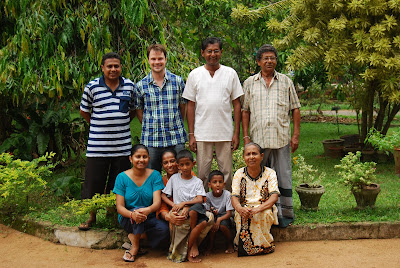 Once at Kuliyapitiya, it was a busy time of moving from home to home visiting relatives and giving worship to elders - with the offering of Betel leaves. Everywhere we went, there was also LOTS of delicious food on offer.
In many ways, the day was uniquely Sri Lankan - with an adherence to tradition that was very noticeable to my British eyes. Yet in other ways it was reassuringly familiar: gifts, continuous eating, and most importantly spending time with family - it could almost have been Christmas day.
Above is a picture of me with members of Thusara’s family.

Like so many elements of my time in Sri Lanka, I was aware of how the details may change, but fundamentally humans are the same the world over.
It was a great couple of days, yet tiring for all! 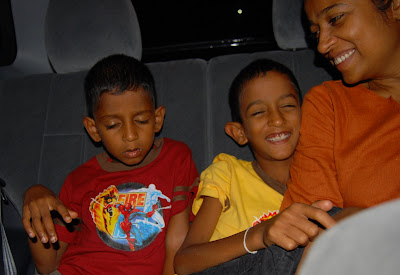 Mark Chappell
Posted by Kanchana and Thushara at 1:59 PM No comments:

A Week in the Field 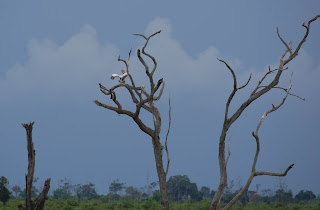 I have just returned from spending 7 days at the ECO-V field station on the edges of Udawalawa National Park. The experience was a fantastic chance to see first-hand the work done by the Pelican Project team, and to get a close look at the realities of working within a rural community.

Staying at the ECO-V field station in Udawalawa village, just outside the park, I was hosted admirably by Harsha, Mananperi, Bandara, and Ajiith. They were able to show me all aspects of the project as well as many of the local sights.

I was taken to tanks where observations on pelicans and other wildlife had been carried out by the team. These wetlands are a haven for all sorts of wildlife - particularly birds, but they are also imperative for the livelihoods of the local fisherman. This is something I was able to learn more about with a fascinating visit to a carp breeding facility run by the fisheries authority. 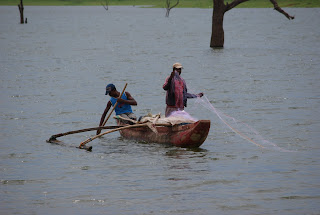 Fishermen rely on a healthy environment


One thing that was never far from view was the invasive plant species lantana (Lantana camera) - seemingly around every corner. It provides a massive problem for the growth of native plant species and also reduces the available grazing for elephants. 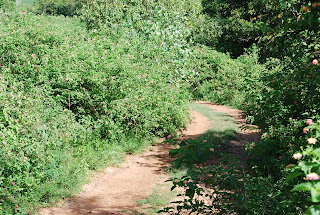 Therefore, encouraging the growth of native plants is an important step, and the Pelican Team have been busy growing and planting saplings that will hopefully grow into suitable trees for pelicans and other birds to roost and nest in. We visited one tank where saplings were starting to take hold on the banks, and it was nice to dream that in a few decades time young pelicans could be fledging from these trees. 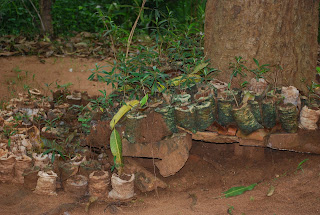 Seedlings in fabric bags prior to planting by a tank 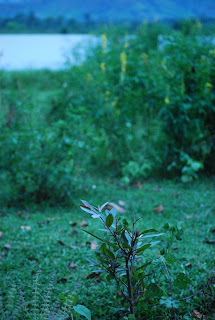 A small sapling looking strong on the shore of a tank

The successes of the tree-planting scheme will, like all initiatives in this area, be dependent on the community’s support - which the team has been so careful to mould.

I was able to meet a fishing family that had benefited from the provision of a sewing machine. This lady, with ECO-V’s guidance has been able to produce fabric bags as an environmentally friendly alternative to polythene. These bags are now becoming popular within the village, and are proving to be an important part of upholding the status of the project within the community. 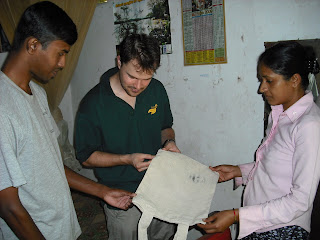 The foundations for the future community support are being laid through the development of the Friends of Pelicans group. Whilst in Udawalawa I attended a Friends of Pelicans meeting, which was hosted by Harsha. I was able to see how keen these young people were to be involved - another positive sign that the area is in safe hands. 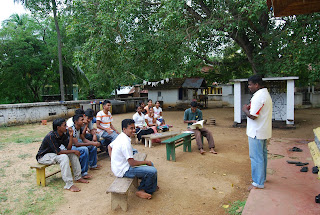 Harsha with some of the Friends of Pelicans

Throughout my stay, I was struck by the level of friendly respect in which the team is held throughout the community, and it was clear that the careful, often slow, steps that have been taken to ensure local support for more eco-friendly activities have been worth the effort.

Walks around the surrounding area gave me opportunities to see the landscape that these local people live in and rely on. The waterways, the paddy fields and the plantations are all delicately reliant on many factors remaining favourable. The community now recognise the importance of saving the pelicans, and a healthy pelican population should mean a healthy wetland system and a more robust resource for the local people. 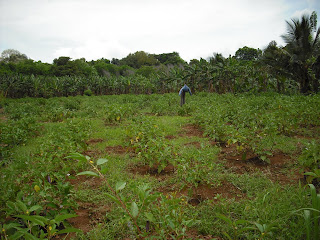 Surviving on the land can be tough


Of course, being situated on the edge of a national park offered many wildlife viewing opportunities, both inside and outside of the protected area. One morning, we went on safari within the National Park, coming close to countless elephants, saw buffaloes, monkeys, monitors, crocodiles, hornbills, bee-eaters, storks, herons, and spot-billed pelicans. It was breathtaking and unforgettable. 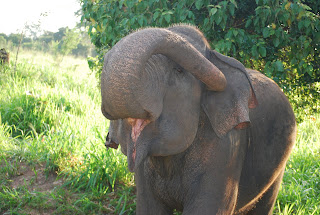 One of many magnificent elephants seen on the safari

Add visits to temples and sites of other cultural interest in the area, a swim in the reservoir, the chance to get to know the project staff better and it all combines to make a very special week - and a valuable insight into the nature of the challenges being faced and met by the Pelican Project team.
Posted by Kanchana and Thushara at 7:41 PM No comments: