Vanni Yathra 2018 – A journey of reconciliation through environmental sustainability.


The month of June was so busy, tired but was very productive. It was the month that many people in the world talk about Mother Nature. For us at ECO-V last June was important just because of environmental month but also we completed our 7th Yathra.

Today I feel very proud and happy. The second generational leadership of ECO-V has emerged!!! When I started ECO-V in 2001 I never had a dream of driving it this far. Its 17 years now and I was the leader in all activities we did though I had very good supportive team and situational leaders. I was so tired and wanting to stay behind….Since I left Sri Lanka in January to join with my family in New Delhi, thanks to Waruni, Chapa and Jayani, ECO-V office and some of its activities had a second generational leadership. Then I gave the challenge to Chapa organizing our 7th Yathra without my leadership. She took the challenge and organized it, conducted it and completed it with a great success. This 7th Yathra was dedicated to Newton our member from North as he had a dream of conducting a Yathra in North since he had the record of participating all past 6 yathras.

So  7th Yathra named as vanni Yathra – a journey of reconciliation through Environmental Sustainability is over now. My dream came true as my participation for the Yathra was only 3 days and that’s only for training component at the beginning and at the end. Rest was completely done by Chapa and Newton of course with the support of Waruni and Jayani from ECO-V office and alumni of Yathras Dhanushka and Gayani. A very big thank you goes to my young team which is our future for a better Mother Nature!!

Conducting a Yathra in North was a challenge. Language barriers, less contribution from local communities, distance from Colombo, less concern for Nature conservation (as they have their own social issues) and lack of awareness on environmental issues. Newton was struggling a lot to find Tamil speaking youth as participants for the Yathra as many were not interested in committing themselves for 10 day ride. It may be due to lack of understanding and not seeing the importance of getting such training. On the other hand, Chapa had a challenge of selecting youth as we got so many applications and had to select only 15 of them allowing Newton to have another 15 from North. The yathra was designed to have a Tamil, Sinhala and of course Muslim youth in equal numbers. Chapa and ECO-V had the main challenge in getting funds (just because my involvement was minimal and Chapa was not having enough experience in fund raising and Newton could not do it at all from Northern province). Thanks to Journeys for Climate Justice and Diakonia majority of funds came in. However, Chapa got her team and Newton got his team and made 30 membered team. All of them met in Kilinochchi on the 2nd of June 2018. I joined with them on 3rd June and started the pre-journey. I felt very happy as by the time I joined, ECO-V team had done a many activities to break ice and build up the team spirit and I had to the theory part related to Climate Change and sustainability. 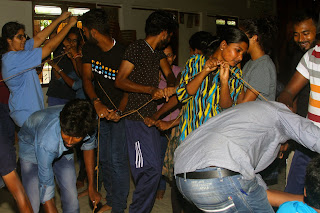 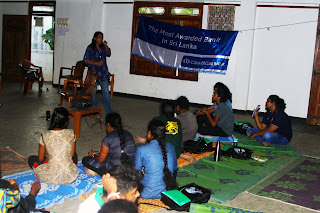 On 4th of June, all joined with District Secretariat where Newton works, to meet the government agent and planted trees. He also joined to ride with our Yathra team for a short distance to celebrate the World Bicycle day (3rd of June) declared by UN for the first time. I also had an opportunity to ride for a short distance which made me very happy too.

It was really funny as I had to rush to the Kilinochchci base hospital early in the morning with Madhushan the youngest youth participant as he got a minor allergic reaction. Instead of riding a two wheel bicycle he had to sit on wheel chair and get admitted to hospital. He was very upset but luckily he got discharged by afternoon. 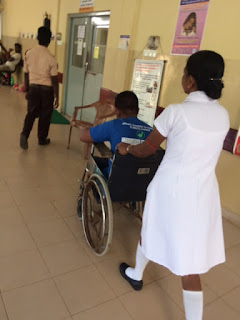 After visiting Iranamadu Tank and having met Col. Shantha Kahagalle who was a great support for getting food and making logistic arrangements for next few days along the yathra route, I left North and came back to Colombo.

From the next day onwards I was not with them physically so they had to take their own decisions matching with the situation. I got updates via phone in the evening and I guess Chapa wanted to make sure that she was correct.

The next few paragraphs are written by Chapa as I was not there,


On 6th of June the yathra team were riding bicycles towards Puththukudiyippu form Visuvamadu where they lodged in previous night. During the journey they were invited to conduct an awareness session on food safety and impacts on polythene and plastics at Puththukudiyirippu Central College that suddenly organized by Col. Anil Perera (23SLNG) with the support of few school staff members.

On 7th of June the team celebrated the World Ocean Day occurred on 8th of June in every year since they were passing Mulativu coastal area on that day. They got an opportunity to conduct a session on “Ocean pollution and World Ocean Day” for staff members of Mulativu District Secretariat. In addition they presented a street drama and created awareness at main bus stand in Mulativu town. In the evening the yathra team got a great opportunity to learn on birds nearby Nanthikadal lagoon.

The team waked up too early in 8th morning since their accommodation of  previous night; the lake view park nearby Madawalasingha lake which owned by 592 brigade of Sri Lanka Army, was a very charming and environmental friendly venue. The team did few nature activities on the bank of Lake such as “Surya Namaskaraya”, few Yoga postures, Wirlies Musical therapy and talking with trees. 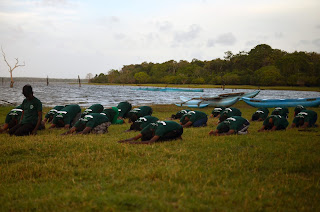 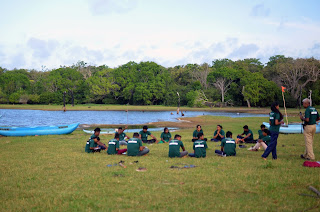 After that they started their journey towards Nedunkeni along Kulamurippu forest reserve and Naagachcholeii forest reserve. During the journey they rested few hours near by a lake and did few group activities which helped to enhance their personality.

On 9th of June the yathra team were riding bicycles towards Pulliyankulam form Nedunkeni. They learnt and discussed on 10 R Process which explained how to minimize domestic waste generating. In addition the team did few activities to develop their communication skills.

Wow...I was so happy to get to know all about these activities they have done without me. Thank you Chapa for adding above words.

I was eagerly waiting for the 10th of June as it was my time to join with the team again in Vavuniya. I met them on the way and joined with the lunch and an awareness programme at Central Bus stand Vavuniya. That was their last riding day and we all went together to Sevarest center run by Sevalanka foundation.

Last day was full of post journey training and day was started by another environmental meditation conducted by me. All what we did was making sure all these trained 30 youth are going to continue their sustainable life style they experienced and pass the knowledge to next generation and be a Green Leader forever. So everybody knew it was end of a memorable journey and a life time experience. Finally, during the closing ceremony while giving certificates, we announced that they are getting a present. The bike!!! They were so thrilled to know that they were getting their bike as a present which was a friend for last 10 days.

According to the feedback we have received, all Yathrees were very happy about the experience they got while spending nights with minimal facilities, riding longer hours in hot sun and rough wind, with less time to rest and mainly no time with their hand phones (the main rules were no phones other than just before bedtime and no selfies during journey). 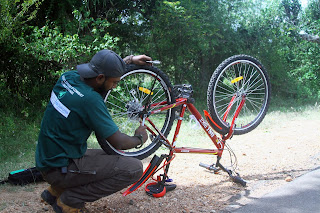 Dhanushka who is one of great resources ECO-V has from Udawalawa,  played a very important role as a mature leader by riding at the end of the line, repairing bikes and giving the moral support to youth who were tired and riding slowly. He was nicknamed as Bicycle Doctor and youth have commented that they learnt lot from Dhanushka too. Gayani added her experience in making changes in government sector (many positive stories since she completed Kelani nadee Yathra - 2011 our first Journey) where she is working at and her knowledge on Paleo biodiversity and archaeology.
My brother Ajith join again for the 7th time as the videographer and is is such a gift we have as he always comes as a volunteer and help us making the video film on Yathras.

I was just watching them with a smile and slightly guiding them whenever needed but mainly it was them who did it!!!!! So the vanni yathra 2018 is over with many positive change makers produced and let’s wait for ripple effects. 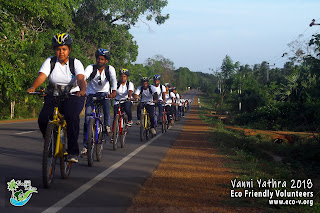 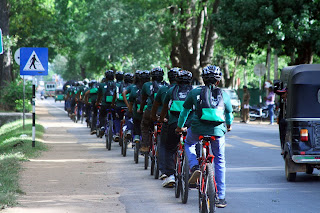 Posted by Kanchana at 4:09 AM No comments: