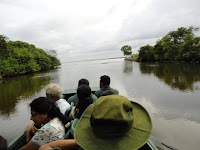 By Madubashini Jayawaradane
As decided in the last Thirasi hamuwa ECO-V went to Muthurajawela on 4th September 2010.
In Sinhala language ‘Muthu’ means pearls, ‘Raja’ means King’s and ‘Wela’ is the paddy field. This wetland as its’ name suggests was a magnanimous fertile paddy field that has produced rice grains like ‘pearls’ for the King during the realm of Kotte.
During the colonial era, canals were dug by Dutch and then English, to transport their commercial goods to the Negombo Harbour through this field. Muthurajawela stands 2 – 3 m below mean sea level, so the canals facilitated sea water to flow inland but it did not drain completely. Hence over the time, salinity of the soil has increased making it unsuitable for paddy cultivation.
In 1996 Muturajawela was declared as a Sanctuary providing legal protection to it as a wetland. This wetland is home for many water birds as well as migratory birds, butterflies and dragonflies, a breeding ground for fish, prawns, and crabs. It also acts as a wind breaker and plays a vital role in flood controlling in Western Province.
It was around 7.15 a.m. when we reached Muturajawela Environment Centre in Indigaslanda. The Centre offers two opportunities, a walk through the wetland along a trail or a canal tour by a boat along the Hamilton canal up to Negombo Lagoon and back. Our choice was the latter.
While they prepared the boats, standing in a circle we introduced ourselves to each other as per ECO-V custom. There were several new faces who were willing to become members of the ECO-V family. It was a pleasure for me to note that the ECO-V message spreads through many generations as the eldest member in the circle being eighty years old while the youngest is just eight years.
Along the tranquil water of the Hamilton Canal we set off. Our boat had two rows of seats, when we were seated it was just like that we were leaning on each other’s back facing the canal bank in front of us. As we went along, the friendly guide who accompanied us explained about many varieties of mangroves, and mangrove associates on the canal bank. We discussed the threats that Muthurajawela faces today. Landfill, encroachments by poor and also rich, garbage dumping, cutting down the mangroves and also the breweries of illicit liquor are common.
It was clear that the water of the Hamilton canal is unclean. Non degradable garbage was floating along with beautiful white Kirala flowers. Over casted sky made the water more blackish. The vegetation along the canal bank reflected on that black water taking us to another world. The serene reflection was cut into huge slices and then blurred into unidentifiable shapes by the waves created by our boat.
As we entered the Negombo Lagoon serenity of the water changed into small waves. There was brush-pile fishing in the Negombo lagoon, where fisher folk uses piles of dead branches. Further away we could see some land marks at Negombo Town and Katunayaka Airport. Disturbed by our boat, small fish were jumping above the water. The boat stopped for a while among some mangroves. There were several species of mangrove flora. We were able to do a close study of knee roots of Mal kadol (Bruguiera spp.), stilt roots and prop roots of Rana kadol (Rhizophora spp.), aerial roots of Kirala (Sonneratia spp.) and hypocotyls or seeds that grow while the fruits are still on the tree. Many wanted to touch some prop roots that hung above our heads. Standing at the very front of the boat Harsha led the discussion on mangroves but, again I missed Kanchana very much!
In a few places at the very edge of the water, there were some Ging-pol, the only mangrove that belong to palm family. They looked like very young Coconut Trees.
Little Cormorant, Cattle Egret, White Breasted Water Hen, Shikra, White Bellied Drongo, Brown Headed Barbet, Great Coucal, Rose Ring Parakeet, Spotted Dove, Night Heron, Stork Billed Kingfisher, White Breasted Kingfisher, Common Kingfisher are some of the birds we recorded without much effort. The star bird of the day was a Purple Heron that stood tall at the edge of the water, giving us a good opportunity to observe it and then flew away majestically reflecting itself on the clam water.
Common Rose, Blue Glassy Tiger, Common Mormon, Lemon Emigrant, Grass Yellow, Indian Crow, Bluebottle, Grey Pansy, Jezebel, Common sailor and some vivid coloured dragonflies asked us to record them. 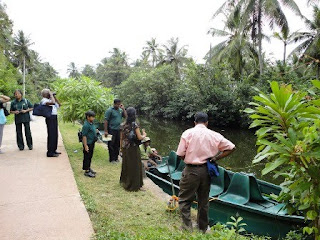 After the Canal tour that took approximately two hours, over breakfast we had our usual discussion on ‘how to feel the nature’. I was surprised to learn that many members also had experienced the tranquility created by the reflections on water. Mr. Gunadasa, from Maduganga, the Mangrove kingdom provided us some valuable information on mangroves. We watched a documentary video on Muthurajawela. There was a small exhibition of posters and preserved specimen on the flora and fauna of Sri Lanka in general, which was in need of refurbishing very badly.
In my mind, once again I walked through Sungei Buloh, a wetland reserve in Singapore. It was very inspiring how well Singapore manages whatever small resources the country possesses.

It did not take even five hours for us to complete the journey. During that brief stay Muthurajawela told us so much. How many of us were able to hear, I know not. But it was singing a very sad song.
Posted by Kanchana and Thushara at 4:59 AM No comments:

It has been six long months since we met last as ECO-V volunteers for a monthly meeting. War and uncertainty made us postpone the Thirasi hamuwa for a long time. Now our members want to meet and take our mission forward. We met after six months at Moratuwa Sarvodaya’s Damsak Mandiraya on on Sunday 15th August. Our President Kanchana joined us from Melbourne via Skype. As our custom the meeting commenced with religious observance followed by one minute of silence in memory of who helped us in the past and to honour all those who laid down their lives for the country.
Going down the memory lane since inception, Harsha briefed the history of ECO-V and introduced our mission and goal as there were some new faces. Kanchana, who joined via Skype, expressed her happiness as she was able to be with us at the meeting, though physically she was far away. The earth becomes smaller in the cyberspace! She said. She also briefed her activities in Melbourne as many members were so keen to get her news.
One of the topics that we discussed extensively was the 10th anniversary of ECO-V which we hope to commemorate next year. Kanchana briefed us about the Kelani Nadee Yathra, a voyage along the river Kelani from its start from the hills in Peak Wilderness to Colombo where river meet the Indian Ocean.
There were some other proposals too to celebrate the event like religious programs, exhibitions and tree planting campaigns.
The other agenda was how to take our message to more people by increasing the membership. We all agreed that ECO-V should not go for an increase of the head count but to recruit members who has a real feeling for the environment and nature and who are willing to become eco friendly citizens. Strategies to attract more members of good caliber were discussed lengthily and proposed the following strategies:-
-to introduce members through personnel contacts, (each member to get one new member),
- reach out to people through exhibitions etc,
-spread the ECO-V message by forwarding the web and blog site to friends in our address books. (Using the cyberspace for a membership drive)
-organising lectures to students of Sunday schools, target groups are the students as well as their parents.
-train youth groups

We had Kavum (traditional oil cake)and Bananas for tea. As the meeting was in progress, we had unexpected visitors. Sarvodaya leader Dr. A.T. Ariyarathne and Mrs. Ariyarathne came to see our Thirasi meeting. They too were happy to have a word with Kanchana. We discussed about our next field visit to Muthurajawela before concluding the meeting. All felt happy to be back with Thirasi and discussed a lot about the past fond memories of ECO-V .
Posted by Kanchana and Thushara at 6:57 PM No comments: