In October, I got another great opportunity to get involved in a very interesting volunteer activity. When I received the newsletter from the Banyule City Council requesting volunteers to count caterpillars, I was thrilled and found the event very interesting. Counting caterpillars….!!!A very different environmental activity!! I have never experienced such a thing in my life as an environmentalist. 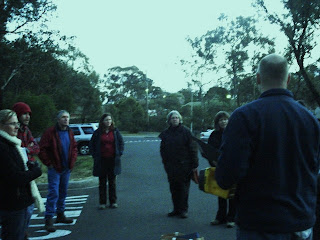 Eltham is a suburb within the Banyule city council and they have organised the event to count Eltham Copper Butterfly caterpillars. Each year these counts are carried out to assess population stability at each of the butterfly colonies. With this information, they monitor changes in population size, host plant use and butterfly distribution over time. The Eltham copper is a threatened species of butterfly that is restricted to small populations in Eltham, Greensborough, Castlemaine, Bendigo and Kiata, in Victoria, Australia http://www.theage.com.au/news/national/back-from-the-brink/2008/01/22/1200764265940.html. It has only one host food plant, Bursaria spinosa (sweet Bursaria); and the caterpillars are attended by several species of Notoncus ant. The ants offer protection against predators and parasites, and in return, the caterpillars secrete a sweet, sugary secretion from an organ on its abdomen, which they offer as food to reward the ants. During this survey, the number of caterpillars per plant, and the height and location of plants were recorded.

The cream coloured caterpillars live in ant nests at the bottom of the bushes during the day. They come out of the nest during the night to feed on the leaves of the bush. Therefore the event started at 8 pm in the night (it was the end of Spring and sunset was around 7.30 pm). I took the train to Greensborough which is about 20 minutes journey from Fairfield where I live in Melbourne.

There were 12 volunteers including me. After a briefing of the methods, all 12 volunteers started walking slowly with their torches ready looking for sweet Bursaria plants. We actually had to look for the black Notoncus ants who are accompanying the caterpillars. It took around 30 minutes to record the first caterpillar surrounded by a group of ants and we all gathered around the plant to see them as some of us had never seen this caterpillar before. We all were thrilled as we gained some good results as the time passed. We counted around 30 caterpillars by the time I left the team at 10 pm. It was such a fascinating time which gave me great satisfaction though it was freezing cold.
Posted by Kanchana and Thushara at 4:21 AM No comments:

Last month has been busy for us in Melbourne. We did not have much time to update on the activities in Sri Lanka and Melbourne carried out by ECO-V. Our team in Sri Lanka successfully participated at the exhibition at the “Mihimadala Exhibition 2010” at the Sri Lanka Exhibition and Convention centre from 21st to 23 of October. ECO-V team led by Harsha and supported by Madhu, Nande, Tharaka and Indika have spread the ECO-V message of conservation and the future plans of ECO-V among the public. Lot of members from the public have shown a keen interest on our activities and most have enlisted as volunteers to participate in our future activities. We were thrilled to hear the comments and the encouragements received from public by our members on ECO-V activities. We felt that we are also contributing to save the nature of mother Sri Lanka on our small way. Next year will be our 10th anniversary. All the new volunteers will be involved in different activities to spread the message on ECO-V on combating and adapting climate change issues in Sri Lanka.

We welcome new volunteers and thank all the members who have participated and dedicated their time to the exhibition.
Posted by Kanchana and Thushara at 4:15 PM No comments: