I have described what "Youth Yathra" is in my previous blog. This is about first Youth Yathra named "Yarl Yathra 2016".


It was unfortunate that I could not write a blog for the month of September. It was mainly due to the physical weakness in my right hand which was identified as Tennis Elbow (inflammation of the tendons of the elbow (epicondylitis) caused by overuse of the muscles of the forearm) Well…I am still having the issue but how can I stay without overusing the right arm :)

I decided to write about the Yarl Yathra before its too late as it was  our first Yathra and the 3rd Yathra for this year  is happening this week. So I am well behind the schedule.

Yarl Yathra was held on 5th, 6th of August 2016 in Jaffna city in the Northern province  with the participation of 47 youth. 25 of them went with us from Colombo and the rest were trained youth from Jaffna. They were trained as Green Leaders who can be ambassadors for combatting climate change and think about sustainability. Though we can train in many numbers we never believe that they all will come up to the level we expect but our intention is at least some of them will be there. The initial name list from Jaffna participants was over 55 and we had to stop them applying for the training. But it was fluctuating and some days we got only 12 trainees and we had to try different ways to bring them back. The main challenge was the language barrier. Most of them were not speaking English so the bridging language was not useful at all. We had to rely on the coordinator of American corner,Sinthuka who went abroad for studies , was working for a NGO. She was the official translator throughout the whole  programme.  None of others could communicate in English effectively but we used body language a lot and we were successful up to a certain stage in day to  day communication but not in teaching or training component. Then everything was translated from Tamil to English and vis a versa which resulted in huge communication gaps most of the time. Anyway, we manage to train 22 youth from Jaffna though our target was 40.


The first day early morning 25 youth from Colombo, who were members of past yathras (Kelani Nadee Yathra, Paapedi, Kolamba Yathra) arrived in Jaffna by night mail train. It was very nice to meet to some of them even after 5 years since our first yathra along the river who are still active in the environmental conservation field. We all had traditional Jaffna/Hindu breakfast at a local restaurant. After that youth from South went to see Jaffna city as for many of them it was the first visit to Jaffna. Remember most of these youth are below 30 years old so obviously could not visit Jaffna due to the 30 years conflict we had in the past.  So it was a great opportunity for them. The official Yarl Yathra started at 2pm at American Corner in Jaffna where Jaffna youth were waiting to welcome all of us from South and South Yathrees were waiting to see their first ever (for most of them) Jaffna friends. 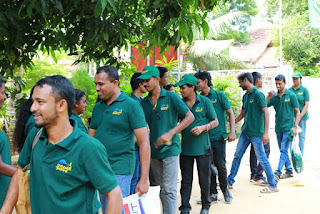 The information officer from US Embassy Mr. Joshua Shen and Ms. Sharmini Sinnaiha also came as invited guests. After an ice breaking session, team was divided into 5 groups and went for different directions to collect polythene along streets. Within one hour all teams collected so many bags of polythene and then they sorted them out for recycling. Only plastic bags with dirt were selected and washed and hang them for drying.


The second day morning all got together to cook Pongal (the traditional rice with milk, mung beans and sugar). After eating pongal for breakfast all cleaned rest of polythene. Again half of the team went to Jaffna city for hanging notice board with messages of protecting trees and their importance. 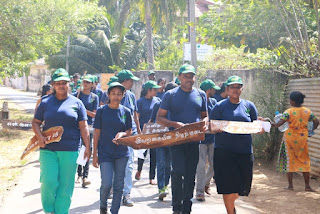 Rest of the team stayed at American corner and got ready for public exhibition. After lunch all got together conducted public exhibition where I saw some emerging leaders.
It was very satisfying to see around 10 youngsters were taking the leadership roles and following instructions of the training using training skills. After lunch they all got into their teams again. Empty plastic bottles were given to all teams and were asked to make their own eco brick using the washed and dried polythene they collected on the previous day. It was very nice to see Tamil/Sinhala/Hindu/Buddhists/Muslims/Christians all of them making eco bricks together. These eco bricks will be used to make a garden bench at American corner. 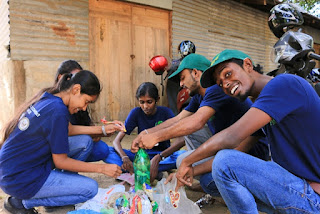 Then it was the time for award ceremony. Joshua Shen  and Sharmini joined with us again after their meetings and Sinthuka, Newton, Priyangi , Sharuka and few others conducted the award ceremony showing their leadership skills.

It was the end of Yarl Yathra and by 6 pm the team from south rushed back to their accommodation packed and got into the bus provide by Sri Lanka Army. The youth from South were ready for their next event to complete the Nature exploration of Jaffna Peninsula on bikes. Only Newton from Yarl Yathrees join with us for the second part and all of us were transferred into the Army camp at Kankasanthurei which is one of the Northern tips of Sri Lanka.


Next  day we rode from Kankasanthurei (KKS) to Point Pedro (PP) was a life time experience as it was hot sun and over 4 hours riding push bikes with the people even who could not ride a bike (thanks to past Yathrees who were so nice to ride the bike with a friend on the back of the bike). Therefore we did not leave any youth behind and all got the same experience. 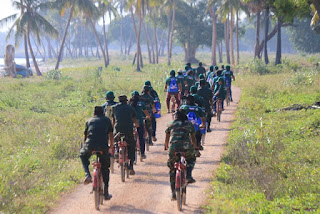 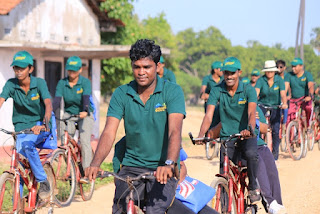 Sri Lanka Army they provided us with food, drinks and even escorted us to show us the route. The morning snack was ready at another Army Camp in Velvetithurei, who welcome us very warmly and admired our effort in training Green leaders. After another 2 hours we were on the Northern tip of Sri Lanka – Point Pedro. That was very exciting as we have never been there in our entire lives.

The lunch was ready by 1pm at the PPD Army Camp and wow…it was so nice to have live music and fresh juice when we arrived there. The next challenge was riding back to KKS to catch the night train back to Colombo. All of us were so exhausted and no energy to ride back. Million time thanks to Col. Herath of Point Pedro Army Camp, just one request the bus was there for all of us to go back. Wow what a relief…… It was just fantastic communication by the time when we came back to KKS all arrangements were ready for us to take a sea bath, even the dinner packets. Youth enjoyed the sea and got dressed, collected their dinner packets and jumped into the train just on time.  Major Lakmal and Col.  Mayasinghe were there to say Good Bye to them and I had to stay one more day to conduct an awareness session for Sri Lanka Army Camp Palali as a way of thanking them for the great help they offered to us. 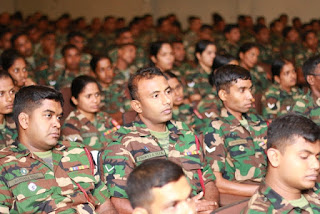 I got up really happy next day morning at KKS for few reasons, one was obviously Yarla Yathra was over which means 10 months of our commitment for Jaffna youth came into an end. Its up to them if they want to continue the mission to protect their environment. We gave the knowledge and training and if they want to continue then we will be still there for them. The other reason was I just got up in Northern Sri Lanka safely which was a dream for us 7 years before. No bombs, no shelling, but just the peace….Now we enjoy the peace and we all are sharing everything together. What a blessing!!! Thanks to all who sacrificed  their lives for this peace. Some of the youth who were branded as terrorists are with us working together to protect Mother Nature. Our wonderful Yathree, Islayan Newton who joined with us in 2011 as a LTTE ex-combatant actively working with us now and has become a Green Leader. I teach environment in Northern Sri Lanka which was a dream for me 7 years ago. What else I  want!!!!!

Posted by Kanchana and Thushara at 11:50 PM No comments: