Covid-19, Lock Down and Rajesthan India.

After being inside for 7 months without traveling, we just came back from a 4-day trip to Rajasthan. It was a great trip with a 17-hour straight drive from New Delhi to Jaisalmer and spending some time around Thar Desert and understanding the history there. Here are some interesting places we traveled and what we saw. I decided to share those experiences and talk about some issues in a conservationist’s perspective. 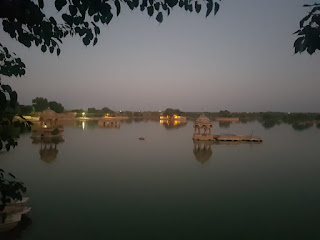 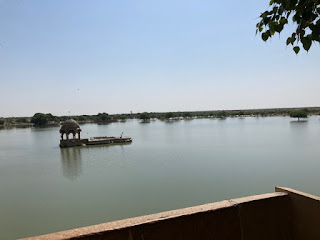 This is the Jaisalmer lake in Rajasthan, India.

We had a visit there as it’s in the middle of the city. While others were talking about the beauty of the lake, I was looking at the surrounding trees, birds and then water. I caught a piece of polythene at the edge of the water body. It was moving a bit oddly. So, I had a closer, careful look. 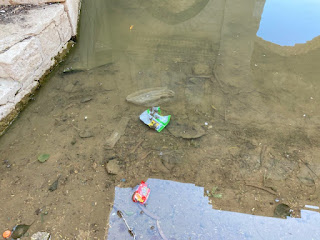 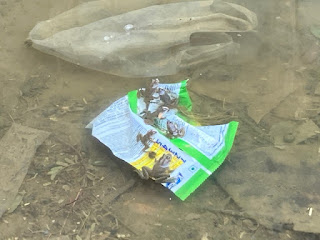 Oopppsss…. automatically I was counting. One...two...three, four five six oooppss….one fell back to water and including that altogether seven frogs...I was surprised, smiling and murmuring of course taking pictures...while others were talking about the lake and its history. I was thinking how these frogs are getting adapted to the pollution and taking advantage of the polythene as a surface to climb up and breath...poor little frogs…. I was thinking while I was coming back.

Next day we had another 45 minutes travel from the city towards the Thar Desert. That was for organised Desert Safari.

When we were planning the Rajasthani trip last week, I was pretty sure I was not going to go on a camel safari. It was my personal ethic that I never want to enjoy sitting on a trained animal back as I know there is some animal cruelty involved in that. But I did not force others not to go. When we went to the place for Camel ride, a Rajasthani man pointed out two camels who just finished a trip and lay down on sand and stretched their legs, saying they were for us. Not having a much break for them it was the turn for our group. All preceded. I was sitting on a local bed. The man in charge was repeatedly inviting me to come while pulling the string coming through the nostrils of the camel. I was watching away as I could not see the pain of that animal.....then I heard a voice behind me saying “we are not coming, you all go”...that was my husband Thushara Ranasinghe . I looked back and saw Nipu (Nipuna Ranasinghe) also standing behind nodding his head saying no. I was not too surprised but a bit anxious to find out what’s the reason behind them for not going….Anyway all others went... we three were deserted in the desert…. 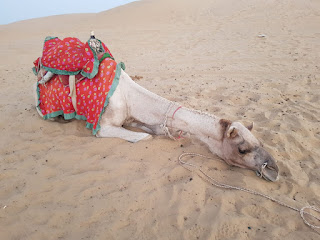 I looked at Nipu. He was patting on a cute, innocent doggie who came towards us by limping a few minutes ago. I approached them. “Putha, why didn’t you go on Camelback? With a little pause Nipu replied…. “It's the same reason as amma’s” and he continued petting that unknown dirty looking doggie girl. My heart melted, I walked away with wet eyes...not just because I was feeling sad, I am sure. 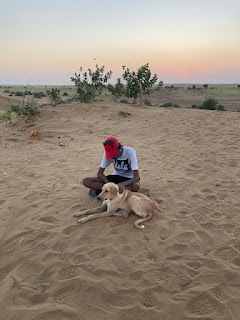 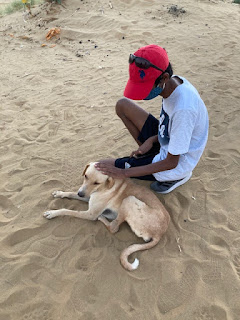 I looked at the horizon and it was almost sunset. I was watching the beautiful colours of sunset and thinking...If all kids are having this kind of METTA - Loving kindness and KARUNA - compassion for suffering, this world would have been a better place for humans and animals…..I have a hope.. 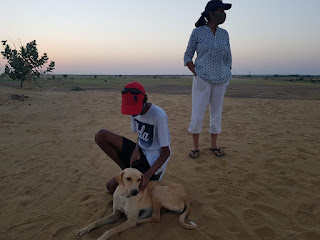 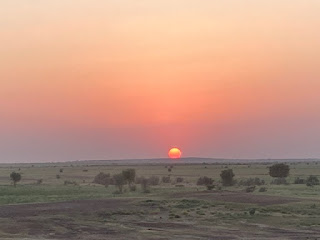 Posted by Kanchana at 4:06 PM No comments:

Updates about My activities just before Global lock down due to Pandemic.

Well after 6 months of lock down due to Covid-19 and after a long break of writing, I thought I should write something now. Honestly there is no such lock-down now in New Delhi, where I live and we all are getting used to the “new normal”. No Cinemas, no metros. no commercial flights so no air travelling and no such free life yet. But life is pretty much functioning with masks on. Today I was going through some old photos so realized that I never reported about such work we did just before lock down. From 8th February to 13th February I was travelling in Myanmar for work purposes. I was invited to train staff of Amava Group (Clothing factory) in Myanmar. I traveled between Pathein and Yangun for training of more than 1500 employees on "Conscious Consumerism and sustainable living". Also we managed to prepare the Sustainability Management Plan for two factories of Amava Group in Myanmar. It was a very tight 5 days working from dawn to Dusk and travelling from one place to the other. Of course the unknown situation of spreading the virus made us a bit nervous but it was a good opportunity for me to make the participants understand about Eco-centric thinking and the value of respecting all forms of lives on this planet under “true sustainability”. 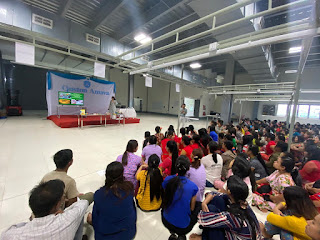 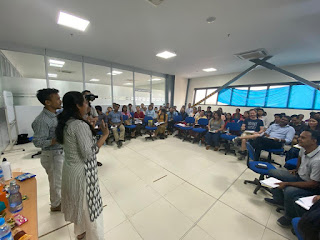 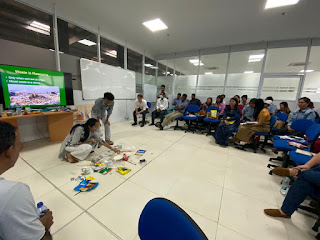 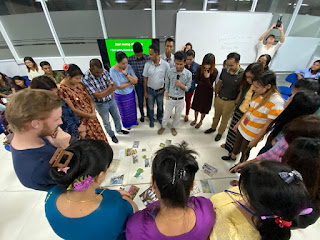 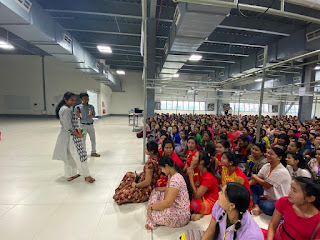 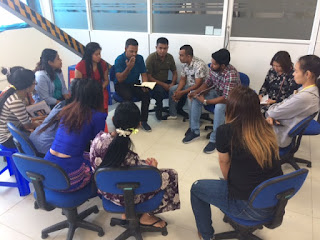 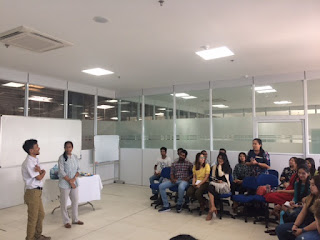 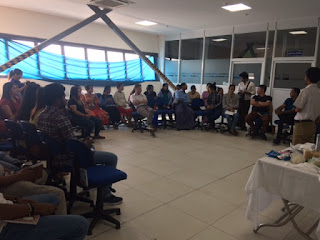 The enthusiasm of trainees was so great and I saw the positive changes they made even on the same day and the following day. Such as refusing drinking instant coffee available in Sachet packets, refusing bottled water and instant food, bringing their lunch in reusable containers, immediate start of bringing a reusable water bottle from home. It’s amazing to see the willingness of change towards a healthy life and healthy management within the factories. when the general awareness for factory workers took place using huge screens and multimedia in the full packed house with translations happening, still the audience was patiently paying attention and I had no issue of keeping their attention towards the talk. All were enthusiastically listening for one hour and even I was flooded with questions after the sessions.

In between the training sessions I had a fruitful meeting with the Eco Temple team who happened to be in Yangon and it was so nice to meet colleagues and discuss our upcoming conference in October. Had the great opportunity to meet the high priest at Oxford Buddhist Temple in Yangon with fellow eco temple team mates. Also I was able to visit the world famous Shwadagon Pagoda. 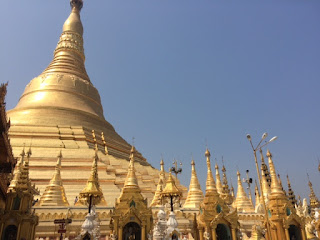 After finishing a tiring but satisfying tour in Myanmar I traveled to Sri Lanka via Bangkok.It was tensed but fully packed flights and had to go through temperature screening and filling health forms at airports. Looking back today, what an experience I had in Myanmar just before all went very wrong by March!!! It was my first travel experience with a mask on and I was feeling very uncomfortable (today it has become a part of the body). 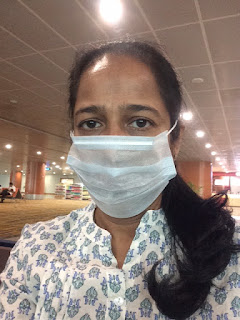 I arrived in Sri Lanka on the 13th February and here again the next step of training sessions started on 14th. It was the same group of companies where Mr. Prasanna Jayasinghe is the CEO. So I concocted the same training in two more factories. General awareness of “Conscious consumerism and Sustainable living” for factory staff and then “True Sustainable Management” for Management staff along with preparing the Green management plan. It was another 1500 more staff members who participated within two days of training. 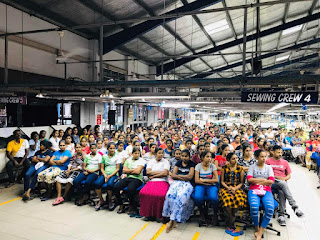 After the fully packed weekend with talking and discussing I had no time to have a break and went to Galle to conduct another workshop on Zero Waste Lifestyle and Ecobricking on the following day. Then another workshop on Sustainable Waste Management and Ecobriking at Diyasaru Park, Thalawathugoda. 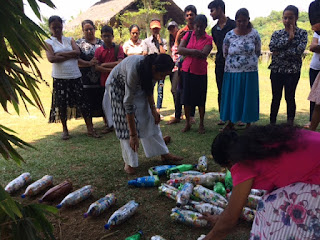 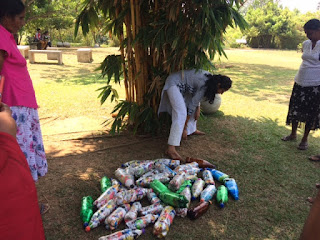 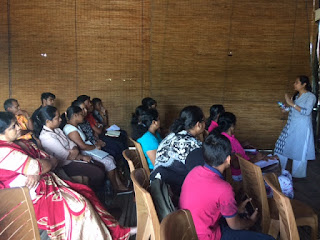 Thanks to the beginning of pandemic situation it was the high time to explain the shift of thinking "Ego to Eco" thinking and acting. It was easy to explain about the rights of each and every "being" of the world taking the Corona Virus as example and how we should co-op up with it (just after the training in February everything changed in the world but I feel what I said was still relevant.


Today I see myself having too long break of 6 months without travelling and just being at home but still working remotely, conducting webinars for the same topics, having virtual meetings and working with kids via zoom and telling them how to connect with Nature even at this difficult time. Oh well…..what a life?? Who thought of being locked down like this, globally!!!

Posted by Kanchana at 9:50 PM No comments:

Year 2020 a decade of uncertainties in the world but expectations for positive change !!

Well, there are no two words that we all are facing the negative impacts of Climate Change, all are suffering either with floods, droughts or bush fires and from many more natural disasters. This suffering is either truly and physically experiencing by them or just seeing and feeling the pain of other who are actually facing the impacts. However, my New Year wish was that I should speed up spreading the words, actions and solution which I have been practicing for last 20 years as an active environmentalist, Nature lover and a wife and a Mother with Green thinking (I am quite proud about how I lead myself and my family for last 20 years with minimum weight on Mother Earth).

So I determined to write more and share, publish a book at the end of year and become a speaker for public to speed up actions for positive change. Honestly speaking about , this was not what I wanted to do. But people whoever knew me, come to my programmes or sessions I ran on invitation and follow my programmes were always asking “why don’t you write what you say and publish because then you can reach more people”. So I thought hmmm….may be that would be another strategy. Anyway now I am living in Delhi and having some spare time of course getting old day by day and prefer to be at one place rather than running here and there (wow…..I will be 50 by November) and not as active as at my thirties….

Writing would be a good thing to use my time wisely. Well….let’s try…I am going to use this existing blog we have been maintaining for last many years and anyway ECO-V is going to be 19 years by this February and spreading our positive words via the blog would be more useful as an organization.

Ok my dear friends, supporters and well wishes of me and ECO-V, I wish you all a very Happy New year and a decade ahead! May your positive dreams become true and may you all get more positive energy to have more and more positive changes for the world!! Let’s paddle together through this life journey with ups and downs with active hope!!