The second part of KSMA training named as “Mihimadale Hithathiyo” was successfully conducted in September 2009. With the success of the 1st part of the training held in May 2009 we all were having so much of confidence for the second part. Out of 20 youth participated in the 1st part 17 were present at the second part. Three have started jobs and one joined with the Sri Lanka army and they could not make it for this time.


It was held at the same venue-Bandaragama Sarvodaya training centre which has most wonderful environment for this kind of training. Lecture theatre was facing to the Bolgoda lake where the trainees had their field excursion on the second day of the training. This was one of the most exiting experience for most of the trainees as it was their first hand experience in educational trip on a boat. Local environmental friendly boats were hired from the fishermen and three fishermen from the area participated in the trip. According to them we were the first team who got their help for environmental activity in their life time even though many tourist hotel are situated in the vicinity of the Bogoda lake.

Prof. Sarath Kotagama, Professor of Environmental science from University of Colombo, Mr. Samantha Gunasekara chief custom officer in Sri Lanka customs and Nanda Kumara (ECO-V member) participated as resources persons. Listening to Prof. Kotagama and Mr Samantha for their inspiring and most important lectures were eye opening event for most of the young participants who have never been exposed to this kind of training before.
Nanda conducted very interesting sessions of Yoga exercises early in the mornings and life saving tips that one should know as a field worker. Both were highly appreciated by the participants. Environmental meditation session conducted early in the morning by kanchana was also admired as at 1st part of the training and this time they wanted to learn it properly to teach other youngsters. Harsha added most of his learning from trainings at Jersey International Training centre and from Conservation Leadership programme which immensely helped to make this training worthwhile.

Poster making competition and other activities like environment and music, environment and culture, religion, history were the sessions they showed a great enthusiasm. Cultural show held at the end of the training gave them the opportunity to perform in front of an audience and that was the second time for such a performance for some of the trainees. The first experience was our first training session in May. A certificate and few awards were awarded for the most outstanding trainee and for the most attractive poster. The evaluation tests conducted at the beginning of the training and at the end of the training showed us the level of change that they have made personally. All the trainees with out any hesitation admitted that the training itself made a huge change personally and it helped them to perform effectively as a team.

No body wanted to leave on the last day but it was the happy end of the Kate Stoke Memorial Award training programme that we organized for CLP award we won in 2008. Everybody didn’t forget to thank Kate-the never seen beautiful lady and the trustees of the KSMA award for giving them the opportunity to learn about Mother Earth.
Posted by Kanchana and Thushara at 9:49 PM No comments:

A work shop for environmental leaders in Colombo and Gamapaha district was held at the Central environmental Authority (CEA) on the 14th of September. All registered NGO’s under CEA in these 2 districts were invited by the director General Pasan Gunasena where main objective was to discuss about future involvements of NGOs and problems they faced when involved in environmental conservation in Sri Lanka.

Hon Minister Mr. Patali Champika Ranawaka addressed the gathering with an eye opening presentation on 4 global crisis such as Economical crisis, Fuel crisis, Food crisis and Water crisis. He also explained the way forward as Sri Lakans and our responsibilities as a Nation to overcome these crises.

After the meeting we got an opportunity to express our views. Kanchana and Harsha participated in this workshop.

Posted by Kanchana and Thushara at 11:26 AM No comments:

After 2 months of silence! 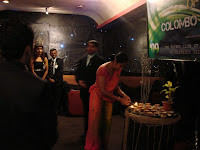 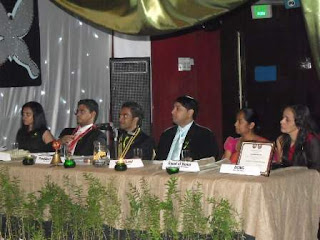 We could not write anything on the blog for past two months. That does not mean that we didn’t do any thing important. Our busy lives at work and personal commitments were main reasons to be away from you all. Thushara is still working with Internally Displaced People in the North for their rehabilitation activities and I tried to continue all the work with the help of my ECO-V team and kids also needed my attention more than before as their 3rd term at school has started.

I am going to post few activities for the months of August and September 2009.

I had the chance of visiting to Padaviya area where we have been carrying out research few years back and had the first glimpse of normalcy returning to villages after recent completion of humanitarian operations. We are hoping to go back to that area soon to start our unfinished work.

First Saturday of August I had the chance of giving my message of environmental consciousness to group of youngsters who have decided to commit them selves to be the advocates of serving the mother earth from the anticipating disasters. It was the occasion of my friend Farhah Markan Marker’s induction ceremony as the president of Colombo Mid City Roteract club and she wanted me to be the guest of honor. I met Farah few years back during my expedition with the youth group in India participating in “Youth Yathra” along Yamuna river. We shared common believes and values during the “Yathra” and she wanted me to share my vision with her members at this occasion as she also believes that youth of the world can make a difference in this world taking the leadership in any sphere. I highlighted the importance of individuals’ responsibility in conservation of environment and it was well received by the audience of youth at the ceremony. Roteracters wanted to continue their campaign to go green with ECO-V and promised to have join projects with us in the future. Miss Sri Lanka 2009 and Mr Sri Lanka were also invited as guests of the occasion.

ECO-V wishes Farah all the best for coming year and her crusade to Go Green with the Roterators.

Posted by Kanchana and Thushara at 10:39 AM No comments: